Four years on from Courtyard Loops and I’m now based in Nottingham, having become involved with another group of filmmakers who are based at the Midland Group and organised around the Independent Filmmakers Association, a more politically-minded and more ambitious body than the avant-gardists of the Co-op movement. Much of the debate in the group is concerned with the advent of Channel 4. A number of Nottingham-based filmmakers receive production awards from Alan Fountain, the C4 commissioning editor for independent film and previously the Film Officer at East Midlands Arts Association. The Nottingham group is also given responsibility for programming the opening weeks of the Eleventh Hour, one of C4’s showcase slots for independent film. 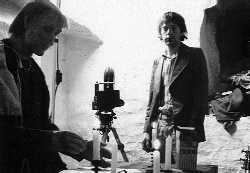 I’ve been working for East Midlands Arts in the exhibition and distribution area but am now working in a freelance capacity in the technical area of film production, working on various productions for C4 and the BFI whilst continuing to receive awards for my own productions and distribution work. The summer of 1982 sees me out on a shoot, filming scenes for A Celtic Journey.

A Celtic Journey is based on the life of Giraldus Cambrensis (also known as Gerald of Wales), who went on a tour of Wales in 1188, the purpose of which was to obtain support for the Third Crusade. Wales is never far from my heart, having spent much of my childhood there and having gone to university there, and I’m often intrigued and frequently irritated by the English tourist’s response to the Welsh language. I’ve also had an interest in Welsh history, and Gerald’s place in that history is a curious one. Gerald is an ambiguous figure who tried to occupy two positions simultaneously, giving advice to the Normans on the best ways of subduing the Welsh for instance whilst also struggling for the independence of the Welsh church from the influence of Canterbury. A Celtic Journey was designed to bring out that ambiguity. It was produced with initial funding from East Midlands Arts, and is perhaps best described as an avant-garde documentary which transgresses the boundaries of a traditional documentary by weaving together different voices and modes of representation.

The film consists of three elements. The first is the story of Gerald. This is told in documentary style by a narrator who starts in London and heads for Wales by road, stopping at various points on the journey and finishing up at Manorbier, Gerald’s birthplace. This road movie narrative is interwoven with another narrative, traced by captions and music, which tells a story of the conquest of Wales by the Normans and their subsequent subjugation of Ireland, alluding also to the contemporary situation euphemistically known as ‘The Troubles.’ The third element is the voice of tourism, which paints a rosy picture of the locations where the narrator tells his story. The theme of history as a tourist attraction opens the film, with a pre-credit sequence that consists of a boat trip up the Thames and scenes at the Tower of London. There are times when the different voices appear to merge, such as when the voice of Gerald sells the attractions of Manorbier, his birthplace, whilst at other stages of the journey the voices provide contrasting views of history.

A Celtic Journey will take me five years to plan, script, produce and edit – I juggle the work with other tasks as my production budget doesn’t stretch to paying salaries. It’s showcased at the 7th International Festival of Film and Television in the Celtic Countries, held in County Down in March 1986, but the film proves too idiosyncratic for Channel 4 who decline to screen it. The film does seem to have a strange effect on some people – a total stranger tells me he decided to call his cat ‘Gerald’ after seeing the movie. The figure in the photograph (the one on the left) is a wax model of the real Gerald, situated in a chamber at Manorbier Castle.