Anthony Bloor is the author of four novels and a scholarly study of fiction writing. His latest novel, the epic love story Tales of Daphne, was published in 2022. As the artist filmmaker known as Tony Bloor, he produced a number of films in the 1970s / 1980s which were shown at art centres and film festivals in the UK and abroad. He currently works as a freelance editor, writer and web developer.

Memo is his personal account of “things parsed.” Computers, programming, film and performance, AI and algorithms, research and bereavement, walking and the muse, writing and frostbite, publishing and publishers – it’s all here, in a narrative spanning 32 years and sewn together by the eight snapshots below.

And as if confirming the view that history moves in cycles, here is the latest news:

Forthcoming: “LOCKDOWN is an online collaboration between Tony Bloor (sound) and Roger Hewins (visuals), produced during lockdown and completed in 2022. The 13m. film is an adaptation of a short fiction by Anthony (aka Tony) Bloor, which he describes as a dark and surreal comedy based on his experience of the 2021 lockdowns. Roger Hewins has choreographed the visuals entirely from stills to create a dream-like impression of a parallel universe, where movement coexists with immobility. LOCKDOWN is the creators’ first collaboration since working together on film projects in Birmingham and Nottingham in the 1970s/80s. Four decades later, they reunite during lockdown to produce LOCKDOWN.” 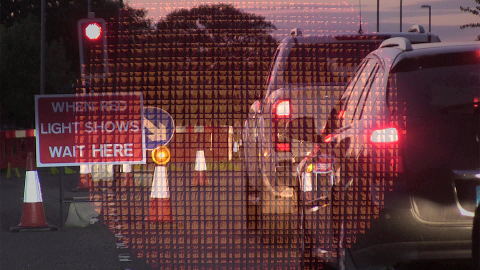 Still from LOCKDOWN, a film by Roger Hewins (visuals) and Tony Bloor (sound)

Note: Developing Pictures (1982) is available for hire from LUX, an international agency for the promotion and distribution of artists’ film and video. Other films by Tony Bloor are held by the National Film Archive. A Celtic Journey (1985) was digitised under the BFI’s ‘Unlocking Film Heritage’ programme, 2017. A Celtic Journey is highlighted in the eight snapshots below.

The End of the Road, flash fiction by Anthony Bloor, published by Litro Magazine, May 2017.

Contributor to ‘Overheard’ at the inaugural Shrewsbury Festival of Literature, November 2016.

In 2015, Anthony Bloor became involved with the Shrewsbury Flash Fiction group, which met sporadically to chat informally about literary matters and, primarily, to encourage writing and an appreciation of the shorter forms of fiction. The meetings were coordinated by Peter Shilston, who continues to manage the group’s website. A number of stories were written in response to prompts from members of the group, and were subsequently posted on the group’s website in 2015–2016. The prompts were:

1. Write a story about somebody who’s lost something. AB’s response: Lost.

2. Write a story that begins with this sentence: “As I write this page, it is six days since I saw the sun.” And ends with this one: “They were still there when the collectors came.” AB’s response: Piss Pots.

4. Imagine that aliens have landed on the Earth at some point in the future and are carrying out an archaeological excavation. AB’s response: Message in a Bottle.